Youth On the Streets and On Their Own: Youth Homelessness in Illinois

CCH estimates that over the course of a year, approximately 26,000 youth in Illinois experience homelessness. This is slightly more than reported in a 1985 state-funded study. Homeless youth are between the ages of 14 and 21, have left home because of serious family problems, and are not in a safe and stable living situation. Youth that experience homelessness are likely to experience abuse and neglect both before and after becoming homeless. We estimate that forty-five percent, or approximately 12,000, of these youth have chronic homeless experiences. Youth in this category live outside and in other public places for prolonged periods, face sometimes insurmountable obstacles to returning home, and have an especially high likelihood of being abused and victimized while they are homeless. Available housing resources for homeless youth do not come close to meeting the need for these services. A CCH survey found that 42 percent of youth seeking shelter from state-funded Homeless Youth programs were turned away last year due to lack of resources. Eighty-eight percent of state-funded crisis intervention programs for youth responded that they need additional residential resources for homeless youth. Abuse (physical, emotional, and/or sexual), substance abuse by a parent, absence of a parent, and long-term family economic problems are all common family experiences among youth that experience homelessness. Pregnant and parenting teens, former and current wards, and youth who identify as lesbian, gay, bisexual, transgendered, or questioning (LGBTQ) account for a highly disproportionate segment of the population of homeless youth. Homeless youth, particularly those with chronic experiences, have a difficulty meeting their basic needs, as well as a high likelihood for physical and sexual victimization, engaging in substance abuse, engaging in unprotected sexual activity, and delinquency. Many are not enrolled in or regularly attending school, and these youth have limited access to services for their physical and emotional health care needs. Due to a 1999 increase in funding for programs serving homeless youth, however, the State of Illinois has made some progress in recent years with regard to providing shelter and supportive services for this vulnerable population. For example, in fiscal year 2000 IDHS spent $4.17 million on programs specifically for homeless youth and served 2,105 youth. In 1996, when the state spent half as much on these programs, only 986 youth were served. Between 1986, when the state started funding programs for homeless youth, and 1994 the state only spent about $1 million annually for these programs. We recommend that the State of Illinois increase expenditures for emergency, transitional, and long-term supportive housing for currently homeless youth, in order to assist these youth in becoming self-sufficient, productive adults. We also recommend that more resources be put into the prevention of youth homelessness through early intervention with at-risk families. Finally, we call for the expansion and implementation of policies that promote the long-term economic and social stability of families. 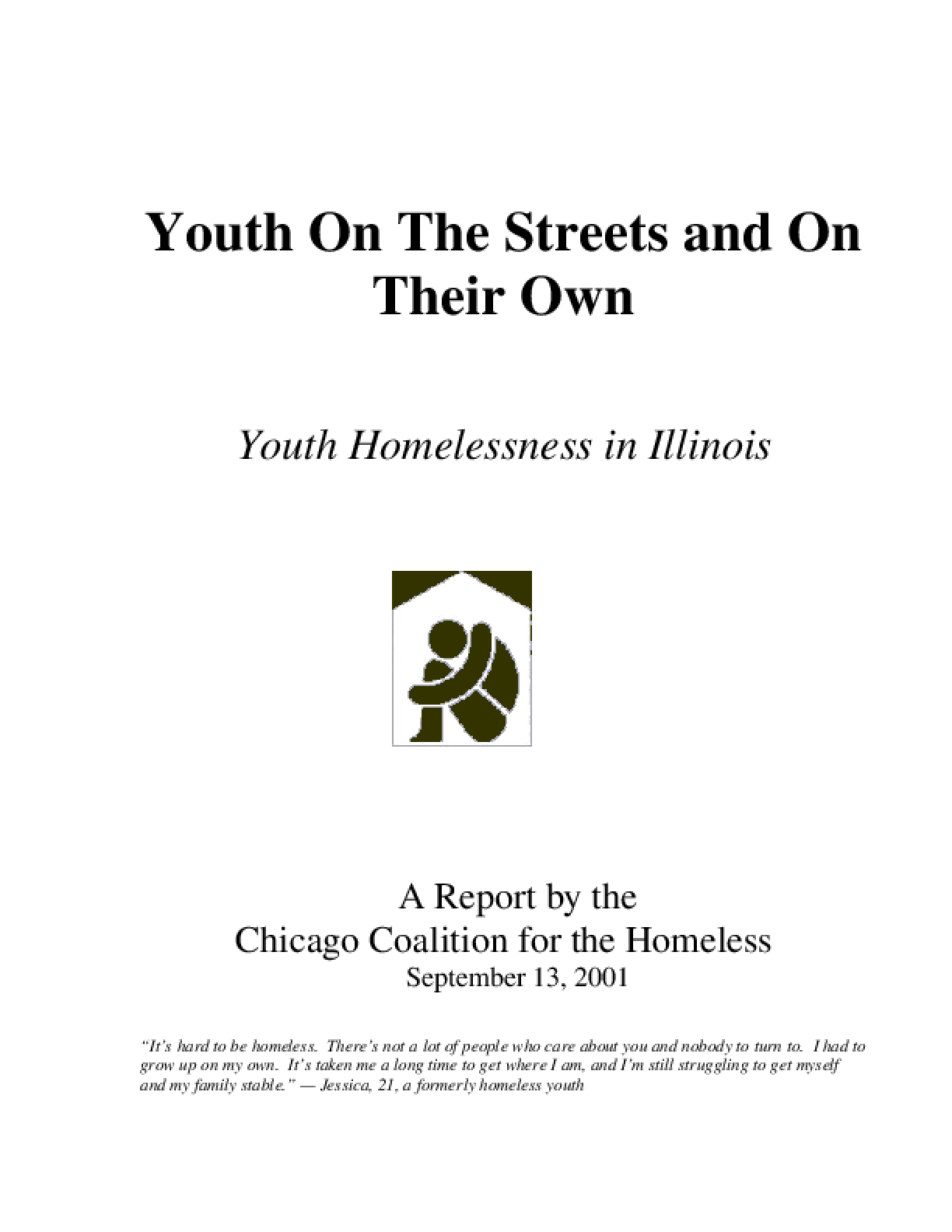