Now nearly one year into President Biden's term, his administration continues to implement and expand illegal and deadly Trump administration policies that prevent people from seeking asylum at U.S. ports of entry and along the border and turn them away to grave, widespread dangers. The administration's use of these policies – known as Title 42 and Remain in Mexico – has perpetuated their inherent cruelty, disorder, and the racist tropes in which they are rooted. The result is a shameful record of human suffering. Since the Biden administration took office, Human Rights First has tracked over 8,705 reports of kidnappings and other violent attacks against migrants and asylum seekers blocked in and/or expelled to Mexico by the United States government.

Despite lifting other pandemic-related international travel restrictions, the Biden administration continues to embrace Stephen Miller's policy of misusing Title 42 of the U.S. Code to block asylum seekers from requesting protection at U.S. ports of entry and to expel people seeking refuge without access to the U.S. asylum system. The administration is defending the expulsion policy in federal court, with the next hearing in a lawsuit challenging expulsions of families at the D.C. Circuit Court of Appeals set for January 19, 2022. The Biden administration bears full responsibility for its rampant use and continued defense of the illegal Title 42 policy, which it is has wielded now for longer and to expel more people than President Trump.

For this report, Human Rights First researchers conducted in person and remote interviews with migrants and asylum seekers, attorneys, shelter and other humanitarian staff, Mexican government officials, and legal monitors. Researchers monitored the implementation of RMX in Ciudad Juárez in person in December 2021 and interviewed 18 of the individuals returned under RMX. Additional interviews of migrants and asylum seekers blocked in or expelled to Mexico due to Title 42 were conducted by telephone between December 2021 and January 2022 and in person in Tijuana in November 2021. The report draws on data from an electronic survey of asylum seekers in Mexico conducted by Al Otro Lado between September 2021 and December 2021, data and information provided by Mexican migration officials, legal complaints, media sources, and other human rights reports. 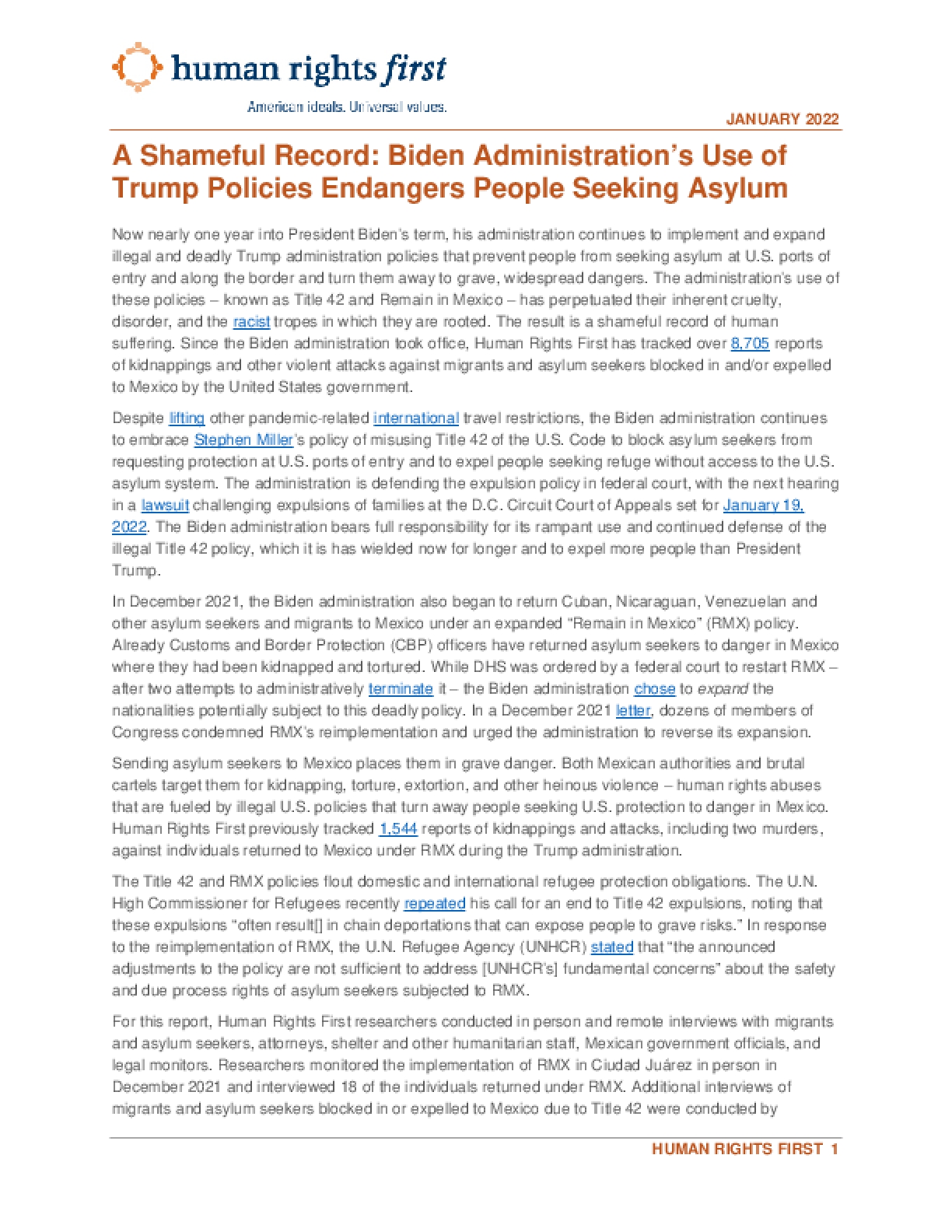